Europeans of Chișinău : What does Europe mean to you ?

Well, I guess Europe, as the one studied during school in history classes, is a dream that became true thanks to great minds like Robert Schuman and Winston Churchill. As a history geek in a regular Moldovan high school, who has never travelled in Europe until she was 20, the European Union was the perfect place. It was the place where things are happening the right way, where people act as a whole within their social spirit and law and justice aren’t just simple words.

Now, the European Union is way more than just the beautifully inspiring speech made by Schuman in 1950. Europe is indeed a place where things are working the right way. Simply said, I would like to see this “idea” of Europe implemented in Moldova. What is Europe now, is the dream for my homeland.

After more than 3 years living across Europe, there are some basics that define me as a European: I have the citizenship of a European country, I’ve voted in spring 2014, I pay taxes, I follow the news in politics and I am engaged in different projects with other Europeans. I’ve travelled in a lot of European countries, I have studied in two, I know good restaurants in Paris, Milano, Dublin and Amsterdam and I know the culinary specifics of each place. But what absolutely defines me as a Moldovan is my never ending longing for Moldova food, specifically mămăligă with meat cooked by my mother and grandmother, paired with the home-made wine by my grandfather.

Yes, I speak Russian fluently, though with an accent, but I can perfectly communicate. I’ve learned Russian for 5 years in general school, which is a compulsory subject for everyone.

The funny thing is, we all study 11 out of 12 years of school other languages like English, French or German, but they don’t stuck as good as Russian does. Russian is a massively spoken language by the media and ethnic Russians who refuse to speak Romanian. Therefore, when the language is in the system so deep infiltrated, it is natural for everybody to speak it.

This is a quite complex situation, and I’ll try to be as apolitical and impartial as possible.

You see, in Moldova there are 13% of ethnic Ukrainians and only 6% of Ethnic Russians, with almost the majority of 70% ethnic Romanians (or Moldovan).  And you would usually meet on the street Russians who don’t speak Romanian rather than Moldovans who don’t speak Russian. As a funny thing, for almost 22 years, in the Moldovan Constitution it was written that the language spoken in Moldova was “the official” language. It took the Moldovan authorities 22 years after the proclamation of independence to recognize that we speak Romanian, nonetheless we’ve been speaking Romanian since it was formed in the Carpatho-Danubian-Pontic territory in the 8th century.

It is a strong point to be able to speak a slavic language like Russian, when your mother tongue is a Romance language, especially when you have a good accent and knowledge. As a personal experience, my knowledge of Russian always has been a pro.

It is a weak point if you consider that Russians continue not learning Romanian just because they know others speak Russian: there is no preserved Moldovan identity. I consider that every citizen of a country should know the language of that country, which is an example of respect toward the country you live in and its history.

While being a part of the Youth Parliament in Moldova, we had conferences with the young people from Transnistria. Every one of us knows at least one or two people from there, but when you sit together, there are a lot of differences. It has been almost a quarter of a century since Transnistria is separated from Moldova – people have lived their lives there, as well as in Moldova.

If taken as an example to follow of how East Germany and West Germany reunified 25 years ago, you cannot apply that to Moldova and Transnistria. Historical point – Transnistria formed in 1924 as a foreign region to remember the newly unified Romania that there are Moldovan brothers in another country. Transnistria has always been a cruel reminder that Moldova will always have something to lose. Adding the army that was installed back in 1991, it will always be a problem to reunify. If following the recent news, Transnistria was denied monetary aid from Russia, its main survival help. It sparks a hope that when the separated region will face international pressure and no money – it will come to Moldova. This is the only hope, since the politicians don’t move a single finger.

Technically, my lifestyle didn’t change, because I have a Romanian citizenship since 2012. Spiritually, it feels closer to Europe that everyone can go freely to Europe and the European path is taken to the next level.

As I live in Romania for the last 3 years, and I have a citizenship for the last 2, I have voted both for the Romania Presidential campaign in November 2014, and for the European Parliament Elections in spring 2014.

Unfortunately, it is the country I was born in and lived 19 years of my life, but I have to be sincere. There are a lot of ethical people in Moldova, but the corrupted ones outnumber them. Corruption in Moldova is played at high stakes, with dirty not transparent procedures. If you take two of the last stories – the sale of the commercial bank Banca de Economii and the International Airport at a very low price and, of course, the rise and fall of the Euro as compared to the national currency – Moldovan Leu (lion). This fluctuation caused that Moldova lost in a couple of weeks a forth of its GDP. Still, no one has any answers for why the exchange rate rose so fast, dropped immediately, but the prices for food and utilities remained expensive.

Sincerely, at this point, I am pessimistic about the future of this country. I do not speak as a political or diplomatic face, but as a simple citizen born and raised in Moldova.

Moldova signed the Association Treaty with the European Union, the trade started since Russia enforced an embargo on Moldovan products, but this is not enough.

After the elections on 30th of November, the European Union recommended to the three pro-European parties to form a coalition and bring to Moldova a foreign prosecutor. After long discussions, most of them with the closed doors, two of these parties refused to create the coalition under such rules. This exactly when the currency started to fall and it took away the national interest toward the European future. During this period, the Liberal-Democrat Party and the Democrat Party agreed to form a non-public coalition with the Communist Party. The national interest directed somewhere else (to the fall of the currency) and they had a green light to form a bloody coalition. More than this, the ex-prime-minister Iurie Leanca, who advocated and signed the Association Treaty with the EU has been, simply put, ‘fried’ from his position. Iurie Leanca was and is the reason a lot of people chose the Liberal-Democrat Party, and as for today (26 February 2015), he left the party as a consequence of the anti-European actions his party took.

Everyday there is something happening in Moldova that saddens me more and more, and I do believe, during the last 3 months, Moldova has lost the credibility build since the Twitter Revolution on 7th of April 2009.

When I started school, we were learning that in Moldova there are more than 4 million people; now – the number dropped to 3,5 million, with almost 1 million legally living abroad, but if to sum up those living illegally, the number is much bigger.

A lot of young people just leave the country, when they have no other options. Myself, I might come back some day, for the same good food my mother and grandmother cook, but a revelation happened a couple of days ago. My mother, who always hoped I’d come back home after my graduation, called me and said: “Do not come back, I am sorry I have insisted so much on that. This is not the country I wanted to give my children”.

It is sad and desperate to hear that from your parents, who lived through the USSR and wanted to give their children a better place to live.

Moldova is a very young country, and having that in mind, I always remember what my history teacher told me once – “Let’s hope Moldova will be independent in 20 years”. All there is, is hope; but as youngsters, the future of the country, we make this future, and we cannot just stay crossed-handed, I know we have to change something. 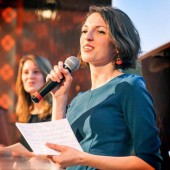