How this idea came into their mind? One of the organizers, Nataliya Borys, discovered that many students this year were from the Caucasus and Iran, so the idea to organize a party based on Caucasian and Iranian culture emerged quickly. As she mentioned “I know the Caucasus and Iran quite well. I wanted to share its culture and its amazing culinary heritage with other students and participants. Caucasian cuisine is one of the best in the world! Don’t believe it? Come and try”.

Picture : Georgian Pkhali, roulés of egglant with walnuts and spices.

The party was a big success. Students cooked specialties from their countries. Among them, Nicolai from Georgia, prepare the khachapuri and the roulés of eggplant with walnuts and spices.[3] It was so delicious that they disappeared very quickly! He prepared another Georgian dish, called ისპანახის ფხალი or Pkhali.[4] It is done traditionally from spinach, walnuts, white onions, fresh herbs and pomegranate seeds. It was so spicy and fresh!

The main hit of the party was Khachapuri. Khachapuri is a traditional Georgian dish of cheese-filled bread. The bread is leavened and allowed to rise, and is shaped in various ways, usually with cheese in the middle and a crust which is ripped off and used to dip in the cheese. The filling contains cheese (fresh or aged, most commonly sulguni), eggs and other ingredients. It is Georgia’s national dish. Moreover, as a Georgian staple food, the price of making khachapuri is used as a measure of inflation in different Georgian cities by the Khachapuri index, developed by the International School of Economics at Tbilisi State University.[5]

Among Georgian drinks there were traditional Georgian lemonade, so one of them is the Tarkhun lemonade. Do you know that the Tarkhun Lemonade was created in Georgia in 1889, when a young pharmacist Mitrofan Lagidze first prepared a drink of tarragon infusion and mineral water? The Tarkhun lemonade is done from tarragon infusion and has a bright green color. Some professors were quite suspicious towards its green color but it is really delicious. For “Soviet” children, Tarkhun lemonade is something very nostalgic, as during the Soviet times, tarkhun was a kind of Soviet Coca-Cola. After its mass production started in the later Soviet era, this drink became exceptionally popular throughout the USSR.

Among prestigious guests, there were representatives of the Permanent mission of Georgia to the UN Office and other international organizations in Geneva, such as Ekaterine Meshveliani. She brought some bottles of gorgeous Georgian wine.

Picture : Iranian dessert, made of almonds and rose water by Fanny.

Iranian specialties were also well presented. Fanny of Iranian-Georgian descent prepared a gorgeous dessert, made of almonds and rose water. It was so delicious that people ate it all. Besides the dessert, there was Iranian cardamom and saffron tea. Among other sweets there were some traditional Iranian desserts with saffron and pistachios. Nataliya prepared home-made Iranian-style pomegranate and sesame seeds jam, it was good, however a bit overcooked.

Isabelle B, from the city of Cherkesk; the Karachay-Cherkess Republic, a republic of Russian Federation located in the North Caucasus area, also cooked some local meals and brought local specialties, such as the high mountain tea and Pine Cone Jam, made from green pine cones. For European people, it can be quite suprising, but in reality it is refreshing and delicious. Another local dish was Khychyny, it was a pie stuffed with potatoes and cheese and khalva, quite very known in the all area.

Tiruhi, an Armenian student, prepared incredibly esthetically beautiful but also delicious Armenian dishes. One of them is Ghapama, a traditional Armenian dish, a pumpkin stuffed with rice, dried fruit, raisins, etc. As she told about this dish: “So dear to the hearts of Armenian families, this traditional pumpkin dish symbolises ‘a sweet life’ and is commonly cooked in a tonir (similar to tandoor) and served at weddings and New Year.” To addition to Ghapama, there was also Gata, an Armenian pastry or sweet bread, similar to a coffee cake. Armenian gata is one of the most beloved Armenian desserts too. “You can just make this gata bread with a recipe to celebrate something or just have a nice dessert with tea or coffee” as Tiruhi says. Back in the day, gata bread was baked in traditional tonir (a typical underground oven) but nowadays, it is baked in oven.

Georgian wine (thanks the Permanent mission of Georgia to the UN Office) and Armenian famous brandy Ararat made the party really to feel as in the Caucasus! Moreover, students played many Georgian and contemporary Iranian songs. Among other prestigious guests, there was Lorenzo A., a former ambassador of Switzerland to Georgia and Russia.

Furthermore, the participants, as well as professors, were invited to play the quiz and guess the countries, as well as the famous places, from the pictures, hanged on the wall. It was an easy task, some of them guessed easily, others felt puzzled by some pictures, particularly from Iran. The most difficult was to guess the region and the city of Cherkesk, as well as its flag. Isabelle, from its city, explained a lot about her region, it seems to be amazing to visit.

The party was an amazing success; everyone really enjoyed it, particularly the food. Guests and participants even took the leftover food home and the GSI staff finished it next days. Students hope to organize this kind of party more often in the future, they thank for the financial and organizational support René Schwok, the director of the GSI, as well as André Liebich for his assistance and to be the maître of ceremony.

Gaumardjos and see you again! 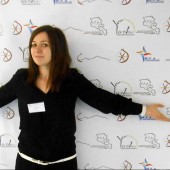